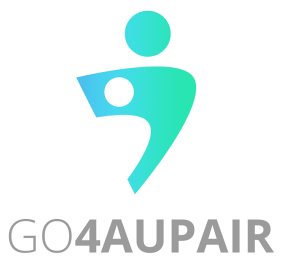 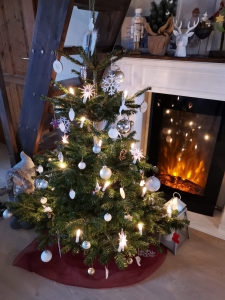 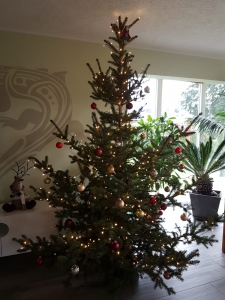 “On Christmas Eve we are allowed to open one present which is our Christmas pyjamas to wear. On Christmas morning we normally wake up and one our present off Santa then have Christmas down the beach. After the beach we come home open more presents then go for a swim in the pool” 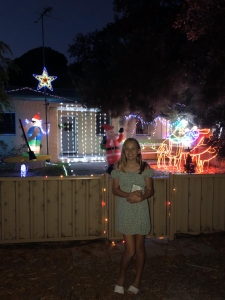 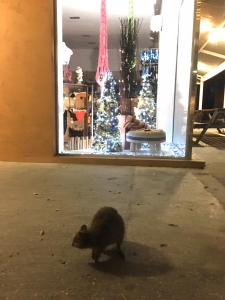 “The morning of the 24th December, excitement levels are high! Everyone hurry’s around to finish the last ‘big shop’ before the shops close ( luckily they close at 7pm!! ? ). Once the shopping is done everyone is at home for the preparation of the “Réveillon de Noel” (‘The meal before Christmas’). Duck liver paté “Fois Gras”, Turkey and a special Christmas cake called “la bûche de Noel” similar to a swiss roll! We are then presented with the tradition of the 13 desserts which can range from fruit to small cakes. The 13 cakes represent the 13 apostles. You should definitely not eat a big lunch on the 24th to leave room for this delicious meal!

Certain children have the honour of a visit from Santa Claus who delivers their presents in person! He always had time to pass by our house! We were very lucky as we were ‘on his route’ before his big night of delivering presents. My friends didn’t have the same chance, he never had time to go to all of their homes in person… so instead he always passed by during the night leaving their presents under their Christmas tree’s to be discovered the morning of the 25th!

The 25th, everyone wakes up to open their presents, the children play with their new toys until the time comes to enjoy the Christmas meal! The Christmas lunch is a mix of left overs from the night before or even some new lighter dishes! ?” 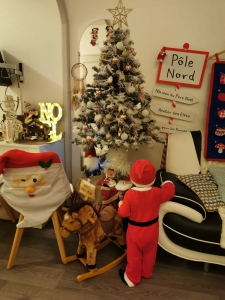 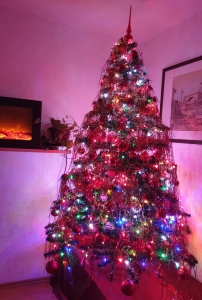 “Christmas in New Zealand is all about sun, sand and family. Having a summer Christmas means we often replace a traditional roast meal with all the trimmings in favour of a BBQ, cold carved ham and seafood gathered by the men the day prior and food preparation usually starts a day or two out from the 25th.

We are lucky to celebrate Christmas day early with my husbands family and as I come from a very small family, our whole day is spent in one place and we don’t have to rush all over the city to see people. I LOVE this the most as often people have to rush from one place to the next all day.

Our day usually kicks off pretty early with Santa and his reindeer having been to deliver presents the night before. There will always be traces of their visit left over whether it be cookie crumbs or half eaten carrots laying about. We love to spoil our children with ample gifts and my dad hands out the presents one by one in order to make the fun last as long as humanly possible.

As we are lucky to be surrounded by beaches we usually hit them bit for swimming, jet skiing and some champagne and beers to celebrate the day. Our family are big foodies so of course some more cooking will happen.

Our Christmas dinner is usually eaten mid afternoon with Christmas crackers, lots of laughs and a giant pavalova, before we settle in for the night with a few wines and a family Christmas movie.” 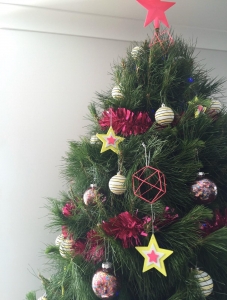 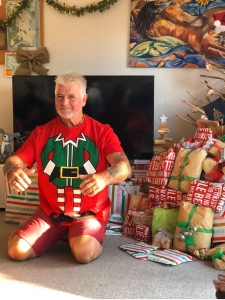 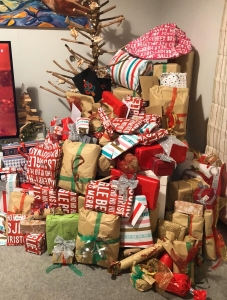 Although traditions vary from one family to another, most families have the same Christmas schedule in Ireland!

Christmas Eve – The 24th of December usually starts off with Breakfast in Grafton street where the radio stations have taken to the streets to broadcast their Christmas specials. Famous Irish characters like Mrs Brown do meet and greets with the children and of course Santa Claus is available for visits in Stephens green shopping center!

Christmas Eve afternoon is usually spent visiting family that we won’t be seeing Christmas day with. Most of the Irish population (who are catholic of course) attend Christmas Eve mass at around 6pm in their local church followed by a trip to the local pub where the atmosphere is buzzing. Neighbours, friends and family come together to have a drink before going home to get into their new Christmas Eve pyjamas!

The children then carry out the tradition to leave out some snacks for Santa Claus and his reindeer at the bottom of their chimneys or in front of their Christmas tree. Santa always got cookies, a glass of milk and a carrot for Rudolph at our house!

The 25th morning everyone then wakes up to open their presents and discover what Santa Claus had left for them! The cookies and milk are always gone and normally the Carrot has a big chunk taken out of it!!! If you haven’t attended Mass on Christmas Eve you usually do so at 10am on the 25th.

Christmas Eve dinner is normally around 2pm and consists of Roast Turkey and ham, vegetables, sage and onion stuffing and gravy!

Desserts vary from household to household but Christmas cake (a fruit cake with white and almond icing) and Christmas pudding (which is make of dried fruit, raisons and a splash of whiskey!!) Then comes the main event at dessert where the baker of the pudding adds a layer of Whiskey to the top of the cake and sets it on fire giving off a blue flame which lasts about 5 seconds!!

Christmas evening consists of board games, Christmas movies and a tired family digesting the meal which they feasted upon earlier that day!”